Look closer at a common chemical reaction to understand heat and energy and learn how they are measured.

Brief Description: In this activity, students look at an exothermic reaction to understand the mole as a standard for concentration and the Kelvin as a unit of temperature.

Ice should be crushed or shaped in very small cubes to establish Triple Point. Be conscious of disposal of the plaster solution as it will harden in the pipes.

A graphic of a thermometer with both Celsius and Kelvin can help students understand that the measurements are parallel but extensive explanation and discussion may be needed to clarify the difference between a direct value (Kelvin) and a comparative measurement (Celsius.)

Variation can be determined in almost any product; this makes the procedure ideal for home individualization.

There are many online programs which enable students to combine their own data to create a larger database. This improves the activity. At-home investigators should make an effort to contact others to increase the database.

The traditional measurement of temperature looked at the effect of energy on matter, a relative measurement: “This is as warm as…“ The temperature was expressed in degrees Fahrenheit or Celsius. By contrast, a Kelvin is an absolute unit. Its magnitude is set by fixing the numerical value of the Boltzmann constant equal to exactly 1.380649 × 10-23 joules per kelvin. A change of one kelvin is the same amount of temperature change as one degree Celsius, but the Kelvin scale is “absolute” in the sense that it starts at absolute zero, or what Kelvin and other scientists called “infinite cold.” (0 K = -273.15 degrees C = -459.67 degrees F. Room temperature is about 70 degrees F, 21 degrees C or 294 K.) The absolute, thermodynamic temperature of an object provides information on how much average energy of motion (kinetic energy) its atoms and molecules have.

Many processes—from chemical reactions to observations of distant galaxies—depend upon accurately understanding the temperature of the phenomenon. That requires precision in the tool and in the way we use it. In this activity, you’ll compare the precision of several instruments to measure temperature. You’ll use Celsius rather than Kelvin but will consider how an absolute unit might make a difference.

The activity begins with the calibration of a thermometer in the traditional way, using ice water as a sort of artifact. You will review the concept of triple point, the temperature where ice, water, and vapor can co-exist. Then you will monitor the exothermic reaction when the plaster of Paris is hydrated. In chemistry, a hydrated compound is a compound with one or more water molecules bound to each formula unit. In this reaction, energy is released as the larger, more stable molecule is formed. This energy is reflected as a change in the temperature of the solution. The concentrations in the directions produce a very small change in temperature. Very soon after that change is noted, the difference between the solution and ambient temperature causes the temperature to change again.

The constant which is used for temperature is The Boltzmann constant (kB) which relates temperature to energy. It’s named for Austrian physicist Ludwig Boltzmann (1844–1906), who is considered a pioneer in the field of statistical mechanics.

Concentration is defined by Avogadro’s number and the mole. In the process of redefining the kilogram, two competing models were investigated. Some metrologists favored using the mole as a unit of mass, and creation of a perfect mole sphere of silicon. Ultimately, the use of Planck’s Constant H earned the support of the majority of metrologists because it also simplified the establishment of standards for voltage and current.

Explore measurement and measuring instruments for temperature, using an absolute standard rather than a comparative measurement. Kelvin may seem similar to Celsius degrees on the surface, but the difference is absolute.

To make solutions that are reproducible, you will use measurements in grams that are then converted to moles. A mole is a unit of measurement that describes a specific number of particles. Using a unit that refers to a number is not such a strange concept if you think about it. Have you ever gotten a dozen ears of corn? The word dozen describes how many ears of corn you have, which is the number 12. In the same way, the mole stands for 6.02214076 × 1023 particles. The particles measured with the mole include atoms, molecules, ions, groups of ions described by the formula of an ionic compound, and electrons.

The mole was recently redefined in 2018. The mole was used to equal the number of atoms experimentally found in 12 grams of carbon-12. The mole is also called Avogadro’s number to honor the Italian physicist Amedeo Avogadro (1776–1856). The molar mass is the mass of 1 mole of particles. Because different particles have different masses, their molar masses are different. For carbon and for all other elements, the molar mass is the same numerical value as the atomic mass of one atom. The only difference is in the units: molar mass is measured in grams per mole (g/mol), whereas atomic mass is measured in atomic mass units (AMU). Molar mass allows you to easily convert from the number of atoms/molecules to the number of moles to the number of grams in a chemical equation. For example, in a chemical equation, coefficients can refer to atoms/ions/molecules or to moles. Using molar mass, moles can be converted to grams.

Use eye protection when using chemicals and when chipping ice. 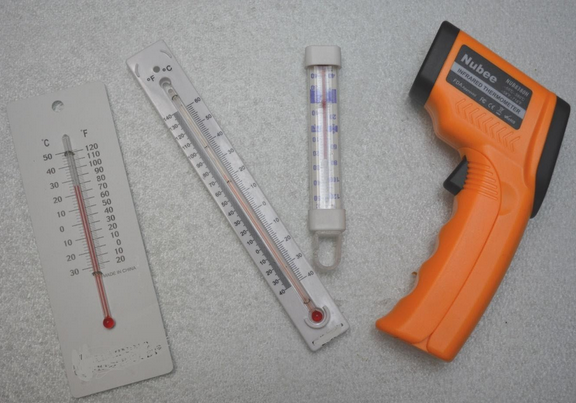 Explore the accuracy of at least one of the thermometers available to you.

What did you learn?